Last month, the new Karabots Junior Fellows received a lesson in the scientific method…by being locked inside a room together.

The Scientific Method, based on developing ideas and putting them to the test, is the basic foundation of scientific inquiry. In order to hone their experimenting skills the Fellows took part in a Room Escape game. Room Escapes originated in Japan in the early 2000s and have recently gained popularity in the United States. In essence, players are “locked” in a room together and have one hour to find a way to escape. In order to escape they must work together to uncover clues and solve puzzles; Puzzles can include finding hidden keys, deciphering secret codes, or even physical challenges. Some room escapes also have a story attached to them in which players must also complete other objectives such as solve a mystery or uncover a story related to the room in which they are trapped. 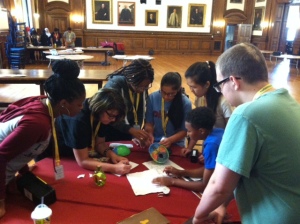 Our students broke into two teams of 8-9 players, each with their own room with the same challenges. Their objective was to determine the location of “Dr. Mutter’s Secret Specimen,” a mysterious object the museum’s namesake hid somewhere in the building. The players worked together and applied their knowledge of the scientific method, developing hypotheses and putting them to the test to conquer the room’s secrets and escape in time. Both teams managed to get out of the room and secure the specimen with five minutes to spare!

5 thoughts on “The Karabots Fellows Escape the Room!”