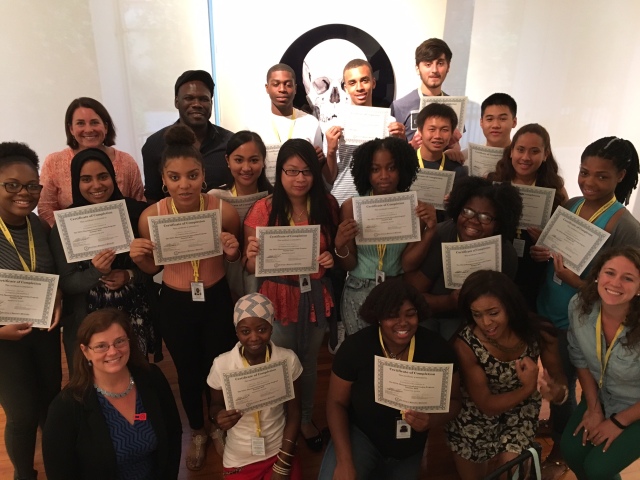 Are you interested in applying to be part of the Karabots Junior Fellows Program, the Out4STEM Program, or the Teva Pharmaceuticals Internship Program? There is still time.

CEPI is proud to announce we are extended our application deadline to FRIDAY, MAY 12, 2017. For more information, check out the respective sites for each program. You can download the applications below:

Hello again, fellow historico-medico aficionados, and welcome to another installment of CEPI Curiosities, our monthly dive into the medically strange. This time around, I hand the medical history reigns to a guest speaker: Jorge Colon. Jorge is currently performing admirable work as a CEPI intern and is an alum of the Out4STEM Program. Past interns have examined such topics as Chang and Eng Bunker (the original “Siamese Twins”), Harry Eastlack and FOP (Fibrodisplasia Ossificans Progressiva), CPP Fellow Chevalier Jackson and his collection of swallowed objects, and the difference between venom and poison. Jorge’s topic today examines the history of an omnipresent figure here at the College of Physicians of Philadelphia: Aesculapius, a marble statue of whom stands at the top of the staircase in the College’s rotunda. 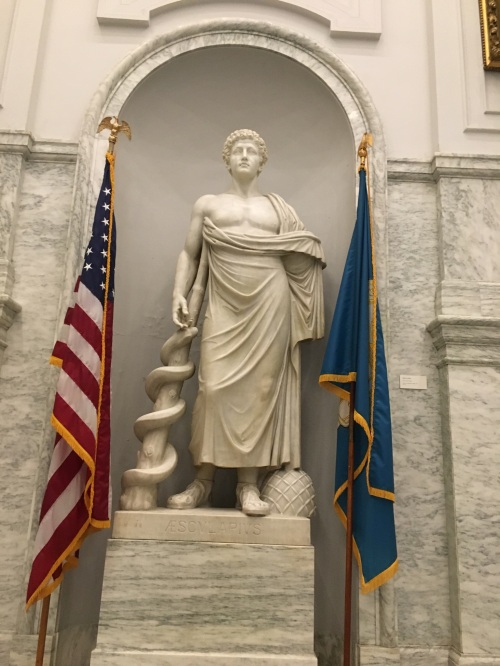 Take it away, Jorge!

Different sources claimed Asclepius to be many things. Some claimed he was a mortal physician (such as in Homer’s Iliad) who was struck by Zeus with a lightning bolt and became god. In other accounts, Asclepius was the ancient Greek god of medicine, son of the god Apollo and Coronis. He was married to Epione, the goddess of soothing; together, they had nine children:their daughters were Panacea (goddess of medicines), Hygeia (goddess of health), Iaso (goddess of recuperation), Aceso (goddess of the healing process), Aglaea or Aegle (goddess of magnificence and splendor). They also had four sons: Machaon and Podalirius, legendary healers who fought in the Trojan War; Telesphorus, who accompanied his sister, Hygeia, and symbolised recuperation; and Aratus. In Roman mythology, he is known as Aesculapius.

Asclepius learned medicine and the healing arts from the centaur Chiron. According to legend, he once healed a snake, whom in turn taught him secret knowledge. The Greeks considered snakes divine beings that were wise and could heal mortals. This is why a single snake wrapped around a staff became the symbol of Asclepius; it later became the symbol of medicine. Asclepius became so skilled a healer he learned how to cheat death and bring people back from the underworld. As a result, Zeus killed him to maintain the balance of life and death and placed him on the night sky under the constellation of the Ophiuchus (the snake holder).

Asclepius developed a loyal following of mortals who traveled far and wide to one of many sanctuaries for healing, called Asclepions. The most famous sanctuary of Asclepius was the Epidaurus, which hosted athletic, dramatic, and even musical games in honor of Asclepius every four years. Today you may notice the staff of Asclepius adorned on things related to health and medicine, such as on medical professionals’ uniforms or on the sides of ambulances.

Logo of the American Medical Association, using the Rod of Asclepius

However, sometimes you may notice a different staff with two snakes wrapped around it and a pair of wings at the top. This symbol is the staff of Caduceus, which belongs to the Greek god Hermes. Hermes is considered the god of transitions and boundaries. He acted as herald of the gods and also escorted the souls of the dead when they transitioned from the mortal realm to the afterlife. The Caduceus was usually affiliated with public speakers and heralds. Printing companies also used the staff. 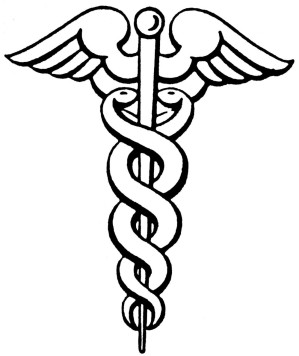 The Staff of Caduceus

However, because it looks similar to Asclepius’s staff, it is often misrepresented today as a symbol of medicine. This dates back to 1902 when the Medical Department of the United States Army used the staff of Caduceus. Today, professional medical organizations use the staff of Asclepius; however, many commercial medical firms make use of the Caduceus. Make sure you keep an eye out for both symbols and see if a commercial or professional group is using them.

Until next time, catch you on the strange side! 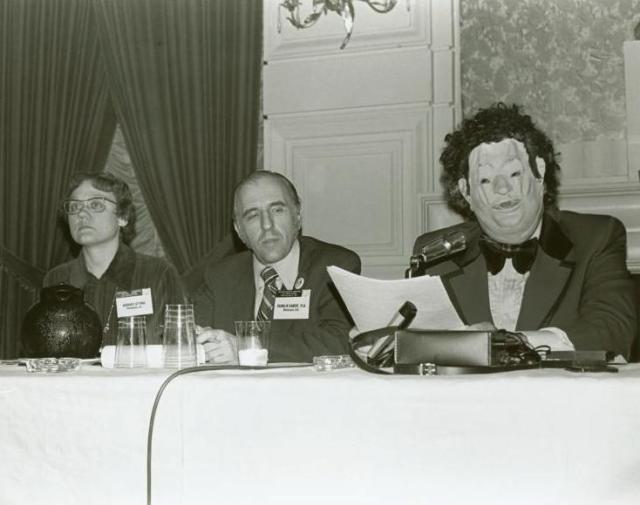 On May 2, 1972, Dr. John E. Fryer, a professor of psychiatry at Temple University, delivered a talk at the Annual Meeting of the American Psychiatric Association calling for the organization to remove homosexuality from the list of mental disorders in the APA’s Diagnostic and Statistical Manual (DSM). Fryer, a closeted homosexual who risked discrimination, harassment, and professional ostracism for speaking out on this subject, concealed his identity, delivering his talk while wearing a rubber mask and using a voice modulator under the pseudonym “Dr. H. Anonymous.”  Thanks to his efforts, the APA declassified homosexuality as a mental disorder in April 1974.

On April 19, 2017, the College of Physicians of Philadelphia will be hosting a dramatic reading of Guy Frederick Glass’ play on Fryer’s speech: simply titled Doctor Anonymous. Glass’s play explores gay conversion therapy and the events leading up to the the APA’s removal of homosexuality from the DSM.  It is the first time selections from his performance have been read in Philadelphia.

Guy Glass is a psychiatrist, playwright, and Fellow of the College of Physicians of Philadelphia. He attended the University of Pennsylvania School of Medicine and completed his residency in psychiatry at the Institute of Pennsylvania Hospital. He held a private practice in New York where he specialized in treating LGBT patients and also edited the newsletter for the Association of Gay and Lesbian Psychiatrists. Later in his career, he branched into performance art, earning an MFA in theater from Stony Brook University. His play first appeared in Los Angeles in 2014. 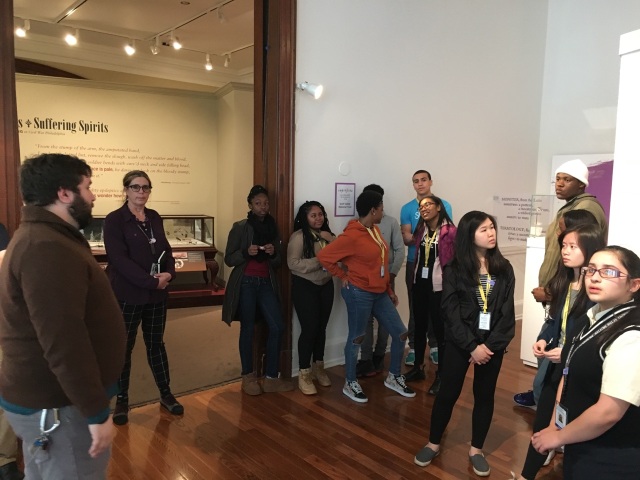 As part of a semester-long project, several members of the current cohort of the Karabots Junior Fellows Program will be developing their own exhibit. To help them in their process, the Fellows recently met with Michael Keys, Exhibit Designer for the Mütter Museum. Michael took this opportunity to introduce them to the Mütter Museum’s latest exhibit: Imperfecta. Imperfecta “examines the shifting perceptions about abnormal human development, from fear and wonder to curiosity and clinical science.” Through historic texts and select human specimens the exhibit addresses a subject known historically as “teratology,” addressing how unusual or abnormal births have been examined scientifically and culturally. Michael walked them through the exhibit, explaining the rationale behind the selection of certain objects and his method for transforming the exhibit from idea to reality. He helped them gain insight into not only exhibit development but the possibility of careers in exhibit design. 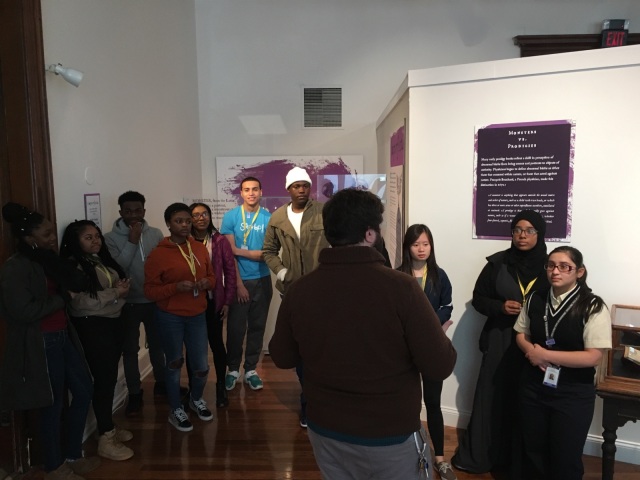 You can view Imperfecta for yourself here at the Mütter Museum.

Attention, Philly 10th and 11th graders (and friends, teachers, family members) who are interested in science and social justice: the Center for Education and Public Initiatives is now accepting applications for the 2017-2018 cohort of the Teva Pharmaceuticals Internship Program. Made possible from generous contributions from Teva Pharmaceutical Industries Ltd., the Program is a year-long STEM (science, technology, engineering, and mathematics) and social-justice oriented program aimed at intellectually-curious Philadelphia high school students who have been directly affected by violence and want to make a difference in their communities. Through a variety of educational programs, these students explore the impact of violence upon themselves and their communities, while improving their understanding of science, technology, and medicine.

Interested students must complete an application form, including an essay and letter of recommendation. (Full instructions are available on the application). (Please note: students must be entering 11th or 12th grade in the 2017-2018 school year in order to be eligible). Completed applications can be submitted via email (subject heading: Teva Internship Application) or standard mail to the following address:

The deadline to apply is FRIDAY, APRIL 28, 2017 (all mailed applicants must be postmarked by that date to be considered). If you have any questions, please contact Quincy Greene, Youth Support Coordinator. For more information about the Teva Pharmaceuticals Internship Program, please consult our website. 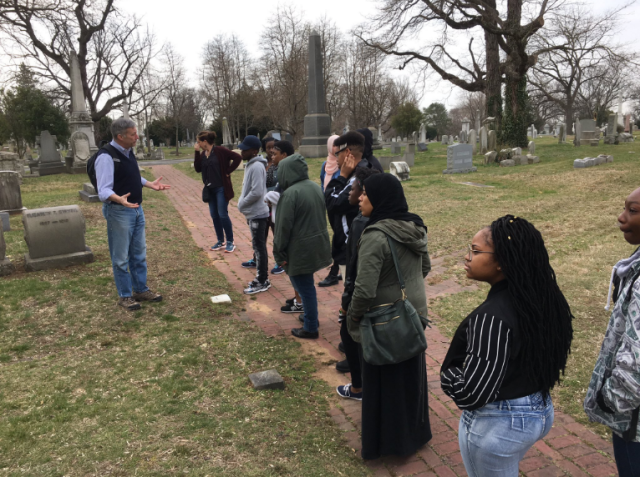 March was a month for the Karabots Junior Fellows to learn about science, culture, and careers connected to death and dying through a variety of lessons, activities, and guest speakers. They learned about hospice and palliative care from Miguel Paniagua, Medical Advisor for the National Board of Medical Examiners and recently-inducted Fellow of the College of Physicians of Philadelphia. They also got a glimpse into the world of funeral direction, courtesy of Tony Moore, Director of Funeral Service Education for Northampton Community College. Along the way, they also gained a greater understanding of cultural interpretations of death and how funeral practices are tied to different cultural beliefs about what happens after one dies. They concluded their month with a trip to the Woodlands. Established as the country home of Philadelphia socialite William Hamilton, the Woodlands became an active cemetery in 1840; it is the final resting place of numerous noteworthy Philadelphians, including several famous College Fellows, such as Silas Weir Mitchell, John Ashhurst, and William Williams Keen, and the founder of the Campbells Soup Company among other notables. It is also the site of the largest grave marker in the United States, an 84-foot tall obelisk constructed for famous dentist and Penn Dental school founder Thomas Wiltberger Evans. 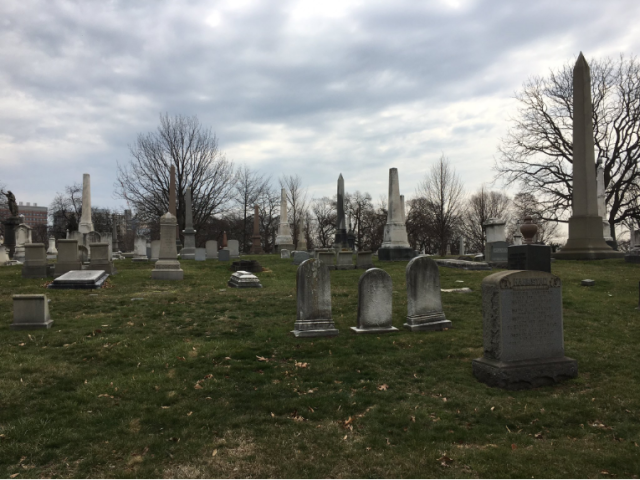 Jim Mundy, chair of the Woodlands Board of Directors, took the Fellows on a tour of the site, including William Hamilton’s mansion, America’s earliest example of a Federal style home. Afterwards, the Fellows broke into groups to explore the cemetery grounds and search for notable “residents.” Even for students reticent at the thought of exploring a cemetery, the trip proved interesting. We are thankful for the staff at the Woodlands for making it possible. 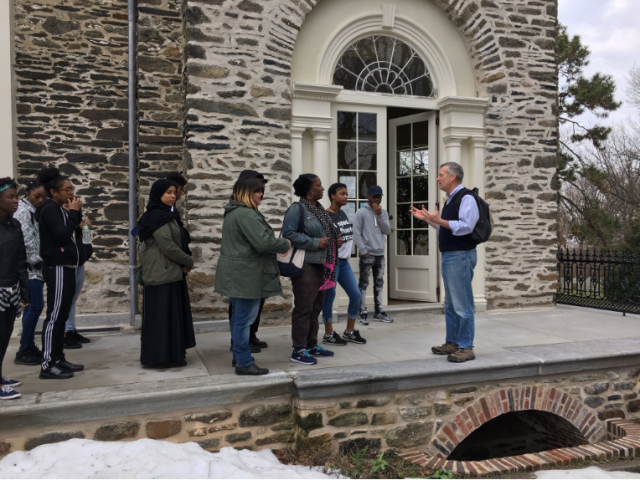