Kevin here again, and I hope your hunger for medico-historico oddities has yet to be satiated because I am back for another installment of CEPI Curiosities. Last time, we investigated the case of the Persian Princess, a fake historic artifact that led to a real murder investigation. This offers a great jumping point to bring us back to the subject of study for the current cohort of the Karabots Junior Fellows Program: forensic science.

The twelfth and thirteenth centuries were an instrumental period in the history of forensic science, as several cultures lent more scientific weight to death investigation. In 1194, England established an official office of the coroner to investigate cases of sudden death or murder (As an aside early English coroners also had the power to perform arrests as well as the power to collect taxes). Around the same time in Bolonga (in modern-day Italy), the first criminal cases emerged where medical professionals were brought in as expert witnesses. Medical autopsies gradually gained favor in Europe around the same time as scientists challenged earlier taboos against examining human remains.

However, the first formalized procedures for forensic investigation originated in Song Dynasty China.  In 1247 Song Ci (Sung Tzu in Wade-Giles), wrote and published the first known forensic handbook: Collected Cases of Injustices Rectified, or The Washing Away of Wrongs (Xi Yuan Ji Lu). Directed at local coroners, the book mapped out detailed guidelines for investigating sudden or mysterious deaths. At a time when coroners required no formalized training, his guidelines provided clear methods for conducting investigations.

Song based his guidelines on practical observation and inferences based on crime scene evidence and body examination. He explained how to examine bodies under certain conditions, such as buried vs. non burial, various stages of decomposition, and skeletal remains. He provided detailed guidelines for conducting autopsies, including diagrams. He showed how to identify evidence of stabbings, blunt force trauma, strangulation, the presence of various poisons, and even lightning strikes, tiger bites, and death from excessive eating, drinking, or sex. He also went into extensive detail on how to determine murder from suicide. Song Ci’s treatise served as the standard manual of forensic investigation in China for centuries and was translated into numerous languages, including English, German, French, and Japanese.

Nomenclature of Human Bones from the 1843 edition, Image in the Public Domain

As interesting as The Washing Away of Wrongs is on its own as a practical manual of crime scene investigation, this wouldn’t be CEPI Curiosities without some medical weirdness. In addition to all the benefits Song Ci’s work gave for the novice or experienced coroner, Song also gave advice on how to undo the effects of death. In his penultimate section, titled “Methods for Restoring Life,” Song enumerated various tried and true methods to reanimate dead subjects. These remedies covered different specific instances of death, such as drowning, freezing, and death from fright and often involved massaging the limbs, blowing air into the victim’s ears, or forcing the (dead) subject to ingest something. For example, a victim of what Song described as the “five deaths” (death from childbirth, fright, strangulation, nightmare, and drowning, presumably not all at the same time) could be revived, even if they had been dead for more than a day, provided the following:

“First take the dead person and place him on the ground with knees bent, like the posture of a Buddhist monk in meditation. Have someone take the dead person’s hair and pull it down towards the ground. Using a bamboo or paper tube, blow a quantity of raw powdered Pinellia ternata [an herb which is a deadly toxin in its raw form]…into the nose. If he revives, administer a dose of raw ginger juice, which will counteract the poisonous effects of the Pinellia” (Sung Tz’u, The Washing Away of Wrongs, Brian E. McKnight, trans., Ann Arbor: Center for Chinese Studies, the University of Michigan, 1981, 161).

Among my favorites is a remedy he prescribed for sudden deaths by “Repulsive Factors” (most likely a heart attack) which involved “thrust[ing] the yellow heart of a leek six or seven inches into the nostril (the left for men, the right for women), causing the blood from [the part of the nostrils] between the eyes to flow. The victim will then revive”(Ibid. 158-159).

If you would like to know more, the Library of the College of Physicians has a copy of the English translation. It provides a fairly quick and definitely informative and entertaining read. Until next time!

Today is the 235th birthday of Rene Laënnec, the inventor of one of the mainstays of the medical professional’s toolkit: the stethoscope. As it turns out, 2016 also marks the 200th anniversary of the stethoscope.

In honor of the device’s bicentennial, the Historical Medical Library of the College of Physicians of Philadelphia hosted an exhibition of some of the stethoscopes in the College of Physicians of Philadelphia’s vast collection. There were also stethoscopes on loan from Thomas Jefferson University Archives and three private collections. On display were stethoscopes past and present, including one owned by William Osler and both an original and a more modern facsimile of Laënnec’s original design.

Students in the Karabots Junior Fellows Program were on hand to examine the collection, learning facts about the stethoscope from our very own CEPI Director Jacqui Bowman who organized the exhibition in collaboration with George Davis, MD.

After exploring the exhibit, the Fellows broke into groups to try their hand at conducting their own auscultations (the technical term for an examination with a stethoscope). They also compared past and present technology by experimenting with a recreation of a Civil War stethoscope in an attempt to learn which was more efficient at detecting a heartbeat. 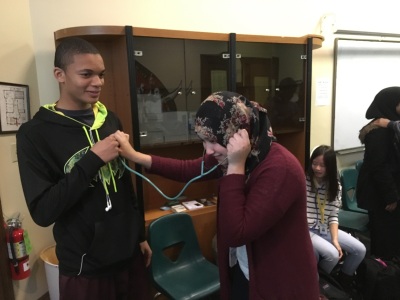 In March 2016, look out for a mini exhibit on monaural stethoscopes in our CEPI display case near the Koop Education Center here at the College of Physicians.

Nearly a year since we began carving out a safe space for LGBTQ youth at the Mütter Museum, our community continues to grow. For our Fall 2014 kick-off event, we had another tour of the museum lead by our medical student partners at LGBTPM+.

Building some trust by getting to know one another and form relationships is the most important part of community-building! This is an impressionistic rendering of our ice-breaker. 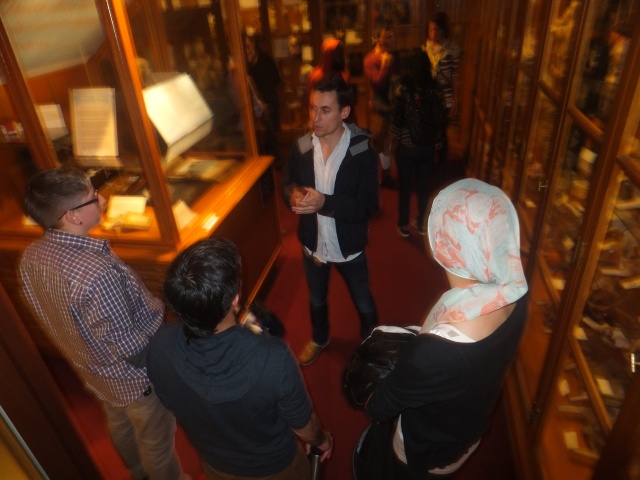 …but it was all business once we got in the museum! Here one of our medical student mentors explains some basic anatomy so we could better appreciate the work of Chevalier Jackson, a physician who pioneered a method for pulling mistakenly swallowed objects from people’s throats, earning him the title of “father of endoscopy.”

This exhibit hits you harder when you pull open the drawers to find the collection of bone fragments, peach pits, dentures, and ornate jewelry he extracted from people’s throats. 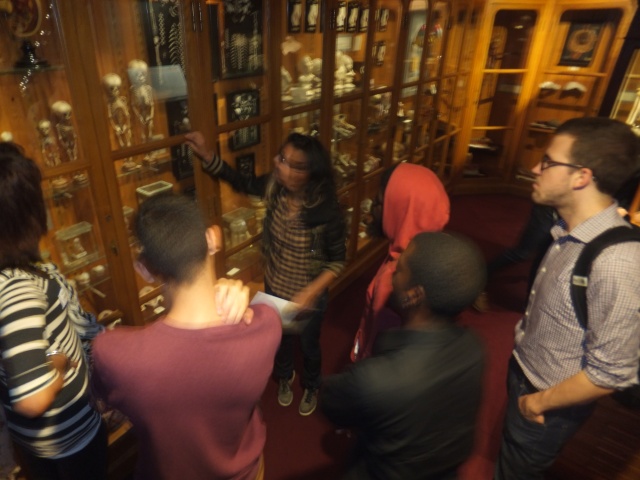 We learned some developmental biology and touched on concussions and brain injury.

And a tour of the Mütter is incomplete without a stop at the 40-pound megacolon.

PSA: You don’t have to choose between serving face and learning science.

For our October meeting, we dove into some not-so-distant medical history for a discussion about masks:

That’s Dr. John E. Fryer in the mask. A gay and closeted psychiatrist, he petitioned the American Psychiatric Association to de-stigmatize homosexuality by removing it from the Diagnostic and Statistical Manual of Mental Disorders (DSM). To do this, he had to wear a mask and disguise his voice, because being gay or advocating for LGBTQ people meant risking his job.

In thinking about how LGBTQ people negotiate safe and unsafe spaces, we spent some time crafting and reflecting on our own “masks.” 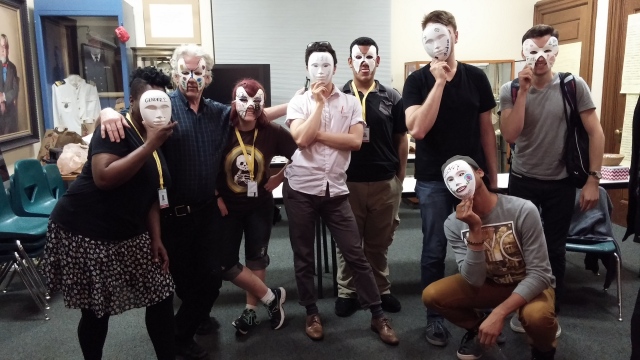 What aspects of our identities are important? Do we always get to embody those identities? Our mask activity helped us reflect on these issues as a group, and see how they affect everyone, particularly in the STEM field.

This turned out to be a really lovely community-building event. Slow change happens because of sustained efforts to build relationships and make our communities visible. STEM doesn’t have to be solitary and abstract. STEM is at its best when its tools are wielded by caring communities that value human relationships. We’re so lucky to have some resources to help foster those relationships and build community within the STEM field. Thanks to our partners at Q Spot and LGBTPM+.

Join us for our next evening event on November 20th, “Out on the App: Coming out Again and Again.” 5-7pm at the University of Pennsylvania’s LGBT Center. Find more information here.

Before getting into our Medical Historical Library, we generated a long list of scientific and slang words for male and female genitals. Besides being educational for me, this helped us think more about all the language we use to describe people’s bodies: “limp-wristed,” “broad shoulders,” “apple bottom,” “child-bearing hips.”

Language comes with a history, and medicine, of course, has always played a prominent role in determining how we talk about and think about our bodies. Here’s one example, the “rest cure:”

In the late 1800s, women were often made to stay in bed for weeks and weeks. This was sometimes prescribed for anorexic women, but it was also a way to control independent and outspoken women. They couldn’t get out of bed or even read, and sometimes they were force-fed! Looking at the before-and-after picture above, we can see that she looks less thin, but her hair is also done, and she has a more pleasant expression. It seems that governing properly lady-like behavior was among the many kinds of authority doctors once had.

Looking at this history helps us think about issues around gender and sexuality that still exist today. Transgender people, for example, still struggle to break free of the constraints placed on them by medicine’s (and society’s) assumption that people’s gender identities must align with their anatomy. Our discussion touched on this very recent clip from the Katie Couric show.

Our next event on Thursday, April 24th at 5pm will be a celebration of Black Gay Pride with speakers Dr. David Malebranche and Dr. Avery Posey. Afterwards we will be holding a resume clinic, so bring your resume with you! And if you don’t have one, we’ll help you develop one. See you then!