In their continued quest to learn all there is to know about forensic science, the Karabots Junior Fellows met with Robert Hicks, Director of the Mütter Museum & the Historical Medical Library & William Maul Measey Chair for the History of Medicine at the College of Physicians of Philadelphia (Dr. Hicks frequently appears in informative videos on the Mütter Museum’s YouTube channel and recently was an expert witness in the comedy podcast Judge John Hodgman). One of many facets of a diverse career, Dr. Hicks once served as a police officer and FBI-trained investigator. During his recent session with the Fellows, he walked through the proper procedures for securing a crime scene and interviewing witnesses…

…and that’s when tragedy struck!

A hitherto unknown assailant burst into the Koop classroom to surprise of everyone present. Brandishing a knife and shouting accusations of a torrid affair between her husband and Dr. Hicks, she lunged at our speaker, rained down several blows, and stole away as quickly and as mysteriously as she had arrived. The whole affair lasted roughly seven seconds.

Disclaimer: Dramatization (no one actually got hurt)

Fortunately, the assailant’s blows failed to stifle the indefatigable Robert Hicks, who arose from the ground unharmed in spite of the violent attack on his person. Regaining his composure, he instructed the surprised Fellows, to write down what they saw in an attempt to parse out what happened. Students in turn acted as both eyewitnesses and investigators as they examined the events of the crime, comparing their testimonies to ascertain the order of events, what was said between the attacker and Dr. Hicks, and a physical description of the would-be assassin. Finally, Dr. Hicks had the attacker, revealed to be Mütter Museum curator Anna Dhody, re-enter the room to compare her actual appearance with the description the students provided (it was fairly close).

The students learned three valuable lessons that day: the challenges facing police investigators recreating a crime scene, the subjectivity of eyewitness testimony, and never, ever mess with Anna!

Over the past few months CEPI has sought to integrate game-based learning into the curriculum for our youth programs. Recently, the Karabots Junior Fellows learned about how games are being used to train the forensic investigators of tomorrow. 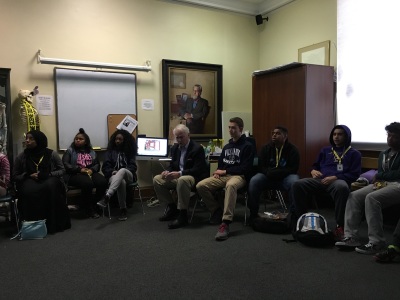 The students met with Allen Burgess, DBA, who served as a consultant and technical manager for Virtual Forensics Lab. Developed by IDeS (now a part of Boston College’s Center for Teaching Excellence) for use in forensic science courses at Boston College, Virtual Forensics Lab takes students through virtual adaptations of real-life crime scenes. Students explore the crime scene, gather evidence, and attempt to draw conclusions based on their observations. Dr. Burgess walked through one of the crime scene scenarios with the Karabots Fellows, encouraging them to put their powers of observation and deduction to the test.